Free Shipping in Continental USA on Orders over $100

Pay over time with Sezzle or Paypal Credit - No interest and no effect on your credit!

[Building Your Model Railroad is a participant in the Amazon Services LLC Associates Program, an affiliate advertising program designed to provide a means for sites to earn advertising fees by advertising and linking to https://amazon.com. See Disclosure Page.] 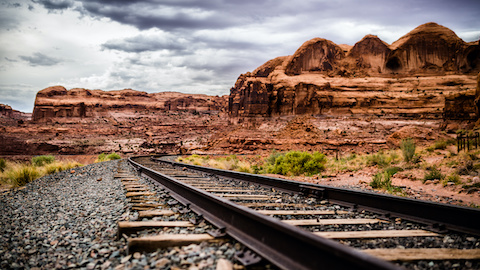 The following is a list of some of the most popular model train scales and gauges used in model railroading:

G scale:The G scale train set (1:22.5) is commonly used for garden layouts. Also called large scale, or standard scale. LGB, Piko and MTH are popular brands of G scale equipment. If you like working outdoors, doing real landscaping and gardening, this is the most commonly used model train scale. These are often used to put around Christmas trees as well. Many of these models are decorated with Holiday themes.

O Gauge: (1:48) The O gauge train sets are locomotives that are big (not as big as G-scale) and impressive and are a favorite of young and old "kids" alike, along with the Model railroad hobbyist. The 2-rail version runs on DC current. The O scale trains, which run on AC current, tend to dwarf the scenery unless you have a very large room for the layout, but they sure are fun to run! These and the O-27 scale trains are also great around Christmas trees.

O27 Gauge: The 027 gauge train set also has a 1:48 scale, but the difference is in the tighter curves. (O27 track sections will make a 27" circle compared to the usual O scale track sections which will form a 31" circle.) Also, O27 rail is a little shorter and thinner than standard O scale. Lionel is probably the most famous, manufacturer of O27 these days. Most, if not all, are produced in the 3-rail version running on AC current. Lots of accessories are available with working parts (circuses, sawmills, etc), which are fun to operate.

S Gauge: The S gauge Train set(1:64) is not as popular as some of the others but definitely growing as a home for a lot of followers and offspring from the American Flyer era. This was my first model train as is the case for a lot of "baby boomers", and permanently instilled my passion for model railroading.

OO Scale - (1:74) Primarily used by British railroad modelers. Most manufacturers of OO scale will fudge a little on the gauge so that the locomotives and rolling stock will run on HO track. Check out the British Railway Modellers of North America for more information.

HO Scale: The HO scale train sets is the most popular scale - (1:87) or 1/87th the size of the real thing. Not too big. Not too little. Fits on a 4x8 foot piece of plywood fairly well for a nice small layout. Also, you will find more supplies, equipment and accessories made for this model train scale than for any other.

TT Scale  The TT scale train set (1:120) has only a very small following in this country but available if that size meets your needs the best. Might be difficult to find suppliers.

N Scale: The N scale train set has a Railroad scale that is smaller than HO scale - (1:160) or 1/160th the size of the prototype. Also, very popular because you can create a greater model railroad empire in a smaller space than with HO. If you like a lot of scenery with long trains curving around inside an interesting landscape, this is the model railroad scale for you.

Z Scale: The Z scale train set (1:220) is even smaller than N scale. This scale is great for coffee tables, a nice addition to your executive desk - good for any "large" layout in a very small space. Easy to transport if you like. At least one person I know created an entire Z scale model railroad empire inside a suitcase and displayed it at various train shows! This model train scale can also be used effectively in the background of an N scale or HO scale layout for forced perspective so that it looks like you have trains or structures way off in the distance when viewed from eye level. This makes your HO or N scale layout look even bigger than it really is.

HOn3-1/2: : The HOn3-1/2 scale train set has a narrow-gauge designation indicating basically that you have HO equipment running on track that measures only 3-1/2 scale-feet between the rails instead of the usual 4ft 8-1/2 in. The prototypes for narrow gauge railways are usually logging railroads where sharp turns around rocky, mountainous terrain are required.

There are other model railroad scales and scale buildings that have been used, but these are probably the best ones to use for the purposes and scope of this site. The tools and techniques described herein can be applied to any of the above scales with minor modifications.

For more detailed information and track gauge measurements for all scales, please refer to NMRA Standards for Scale Models.

(reprinted and revised with permission from bymrr.com)

Note: All non-product photos used on this site have either been taken by the author or the licenses have been purchased.