Free Shipping in Continental USA on Orders over $100

Pay over time with Sezzle or Paypal Credit - No interest and no effect on your credit!

[Building Your Model Railroad is a participant in the Amazon Services LLC Associates Program, an affiliate advertising program designed to provide a means for sites to earn advertising fees by advertising and linking to https://amazon.com. See Disclosure Page.]

Have you been wanting to build a model railroad layout but are....

Stuck in the track planning stage?

I remember when I was first planning a layout for my room-over-the-garage. I think it took me almost a year to decide on the track plan, which then kept changing after I started building benchwork. I made a lot of mistakes then, which I can't change now without starting all over. I have built five more train layouts since then, each time learning more than I knew before. I read multiple books and articles about it and then start sharing this information with others, most of which you can read about in these pages and in the pages on my other website, building-your-model-railroad.com.

I've also purchased and downloaded almost all of the different train and track planning software programs, which are listed on the Model Railroad Software page on that same site. Most of them are very good programs, but most have a steep learning curve. None of them are "easy" although they say that in their ads. Everyone who uses them has their own preference, which is usually the one they started out with, because if you already spent a lot of time learning about one program, why spend a lot more time learning a new one that does mostly the same thing?

Getting back to the question: Layout track planning is a show-stopper for a lot of model railroaders. Wanting to do something and actually doing it are two different things. Finding the inertia to get started is the biggest hump of the whole project. You've probably looked at several books with lots of different track plans, but how do you know which one is right for you? Besides those are other people's track plans. They're not your layout design. You want your railroad to be individualized to your ideas, not someone else's.

So, what if someone comes along and says, "Tell me what you want and I'll draw the track plan and design it for you!" for the same price you would spend for one month of cable TV or for going out to dinner once, or for the same price you would spend on a locomotive or a train set. Sounds like a fair and reasonable investment. And it's not like you're letting someone else actually design it for you. It's really about letting someone else do a service for you by using YOUR ideas to draw the track plan and put in on paper (digitally). So the ideas and the creativity are still yours.

Once you get the track plan, you can then start building the model railroad of your dreams. You now know what benchwork and backdrop you will need. You know approximately how much track, how many and what kind of structures, what kind of scenery items and how many trains you will be able to run. When you go shopping or go to a train show, you will know exactly what items to look for. There's no overbuying. You can plan your budget based on your track plan.

So if you are suffering from "analysis paralysis" - stuck in the track planning stage - and don't know where to go for help, consider having someone whose done it before put your ideas on paper! Make your layout come alive - make it tangible, bring it into reality instead of just floating around in your head.

Here is an example of a layout design that I did for a fellow model railroader recently. This is just a rendering of HIS ideas. He told me what kind of track-plan he's been thinking about and I put it on "paper". (Actually I sent him the image that he can print out at home.)

He can now take this track plan and begin building his train layout. He will probably modify it along the way. That always happens when building a layout. But it will give him something tangible to start with. 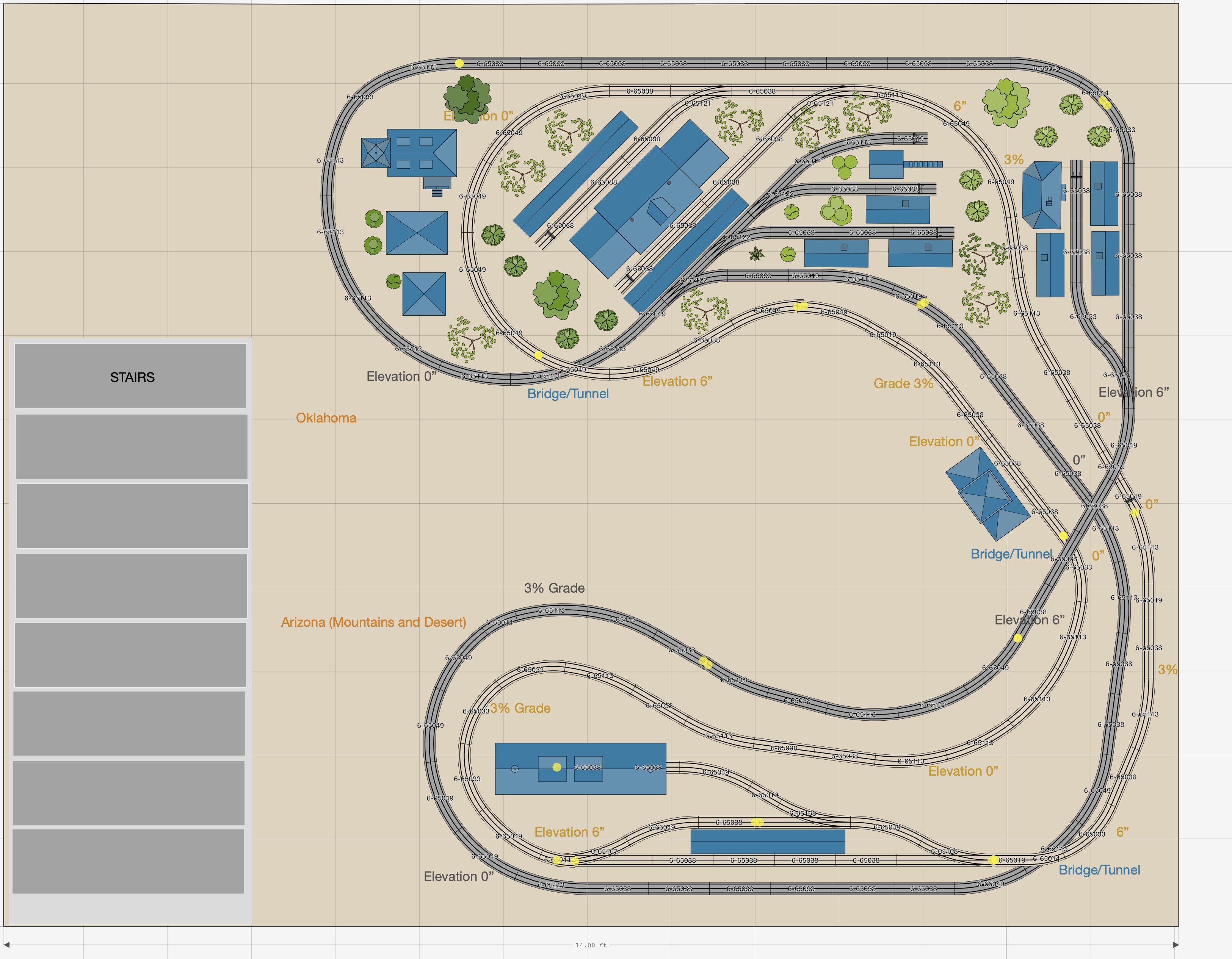 Fred's idea was to have a track plan that he could build in a 14' x 11' loft room using Lionel O27 gauge track, that would harbor a mountain tunnel such that on one side, he could model Oklahoma where he lives, and on the other side would be Arizona with mountains and desert. He wanted two closed loop mainlines with maybe one or two branches on each. So, here is the rendering I made of his ideas. I also made a few suggestions regarding lighting for his room, benchwork, layout surface, track grades and elevations for added interest. He was happy with the result and agreed to let me use it on the website.

If you are interested in this service, please send me an email with details on room size, layout size, track gauge or scale, what locale and/or theme you wish to display, and any special features you would like. The more details I get, the better.

It takes many hours to do one of these and I have multiple other obligations, but I can usually get one done in a week or two depending on how complicated it might be.

(Payable in advance. I am unable to provide refunds since there is no way I can get the time back that I spent on the project. I am willing to make specific modifications one time only for no extra charge.)

So don't remain stuck in the track planning stage of building your model railroad.

Send an email now to gjwarth@bymrr.net

Note: All non-product photos used on this site have either been taken by the author or the licenses have been purchased.